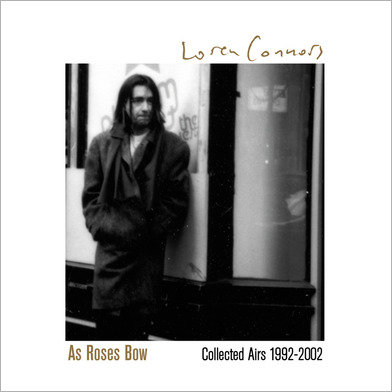 As Roses Bow: Collected Airs 1992-2002 is Loren Connors' assembly of his most melodically rich and stunning miniature compositions. Inspired by O'Carolan's airs and other Irish airs of the past, these works, recorded during a ten year period, are melded with the distinctly personal and iconoclast adaptation of Connors' blues.

These 43 pieces are Connors' complete airs, culled from 10 albums (eight of which are out of print) and one single, including his groundbreaking Hell's Kitchen Park (Black Label, 1993), Moonyean (Road Cone, 1994), as well as obscure titles like St. Vincent's Newsboy Home (Item Recordings, 1998) and Lullaby (Carbon, 2001) plus four unreleased airs. Nearly the entire critically heralded Airs (Road Cone 1999) is remastered and included as well. A timeless collection of the most gorgeous and accessible work from one of America's most iconoclast artists. Vocalist and long-time collaborator Suzanne Langille appears on four pieces.

"Connors' output has always been minimalist and sparse, with an emphasis on both slow, accentuated tones/drones and a laborious, almost Feldman-ian consciousness of space and sound. As Roses Bow weeds out Connors’ more morose and avant-garde moments, making it one of his most accessible collections to date. It's a great introduction for neophytes wondering where to dive into the vast ocean of the guitarist's work." -- Tiny Mix Tapes