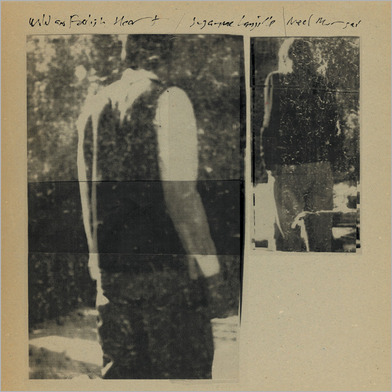 Suzanne Langille started her recording career as a vocalist alongside Loren Mazzacane Connors on a string of rare LPs in the mid-1980s acclaimed for their startling transformation of the blues. Since, Langille has added vocals and lyrics to many Connors albums, including the landmark Hell's Kitchen Park, collaborated with San Agustin and issued a conceptual full-length on Secretly Canadian in 1998. But all along a proper solo album has never surfaced -- until now.

Wild & Foolish Heart joins Langille with Indian classical musician Neel Murgai -- a long-time collaborator and leader of his own ensemble. Langille's blues-filled moans are perfectly matched to the dazzling drone and subtle melodic rhythm of Murgai's tanpura and daf (Persian frame drum). Their reworking of popular/traditional songs and Langille's own dramatic compositions draw out redemption, sorrow and celebration in a way that makes listening to these sides feel like uncovering a lost field recording of otherworldly haunts or spirituals.

Langille's pervading melancholic tone flares in the tradition of Patti Smith and Thalia Zedek at times. The LP ends with a scorching blowout from the Haunted House band, the legendary/defunct downtown 'blues rock' improv-combo fronted by Langille, with Murgai, Connors and San Agustin guitarist Andrew Burnes. This 550-edition LP features cover art from Connors, a selection of his rarely seen photography/collage work.

"The boundless passion and fury of Langille’s anguished moans throughout Wild & Foolish Heart is a moving experience. Lifted by the minimal compositions of Indian composer, Neel Murgai, the album brims with the soulful storytelling and ritualistic patterns of ancient blues classics without leaning too heavily on ancestral hand-me-downs." -- Justin Spicer, KEXP