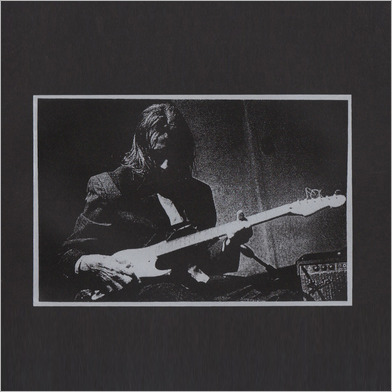 A Fire is a single-sided LP by master guitarist Loren Connors. Recorded live in Philadelphia, this 23 minute piece follows in the style and visual presentation of Connors’ previous Red Mars CD. Instead of sculpting multilayer tape-recorded pieces, the NYC guitarist is expounding on spontaneous sound, either rattling screams from his Telecaster or bending the avant-garde blues style synonymous to him since the late 1970s.

For those who have never witnessed Connors in concert, this recording is a forceful and right-on document of his always flourishing powers and magic. A Fire is pressed in a one-time edition of 350 copies on 180 gram vinyl. Features jacket cover and insert of Connors' cut/paste remodeling of photos -- both are handscreened by Alan Sherry at Siwa.

"On this one-sided, 33 rpm LP, Connors gets back to basics. There’s no singer or instrumentalist to accompany him, no tape layering to thicken the sound, no overdubbing — just Connors, his electric guitar, and whatever he plays it through (a delay pedal and a tube amp, I’m guessing). The title of this suite references world-changing volcanic eruptions, but for much of its length the music isn’t particularly explosive. Why should it? If you take the world’s view, species come and species go, and a few centuries of hot magma or ashy chill are nothing when you’ve been around for billions of years and have a few billion more to go. Instead Connors traces stately, churchy melodies that sound like they hit a few walls during their trip from amp to microphone, accumulating a layer of distance from the present with each impact." -- Bill Meyer, Dusted/Still Single