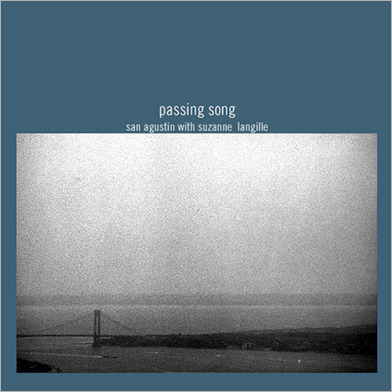 The New York city based San Agustin has been performing with vocalist Suzanne Langille since 1997. The two have found an unmatchable connection in their expansive dialogue of impeccably matched twin guitars and percussion with the ageless blue moaned singing and lyrics. These six passing songs are meticulous flares, crafted in the highest order. Slightly dissonant leanings and free spirit that is carried by a woman who has lived each word she sings.

"Suzanne Langille is probably best known as a longterm associate of Loren Mazzacane Connors, but here she adds understated melodrama -- very much in the tradition of Patti Smith and Thalia Zedek -- to a mini album by New York trio San Agustin. Essentialy, the trio juxtapose some spiralling electric guitar workouts alongside more earthbound, American blues and folk patterns, so that the nearest comparison is probably the pioneer evocations of Tim Foljahn's Two Dollar Guitar. They're impressive enough, but they're still improved by the sonorous moans of Langille, whose greatest gift -- as evinced by the superb 'So I Lingered' -- is one of restraint. Unusually, her contributions are tantalisingly brief, drifting away into the mix just when most singers would hold their ground." -- John Mulvey, The Wire