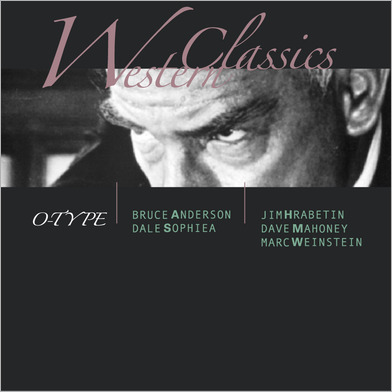 Western Classics, the sixth overall album by O-Type (members of legendary Bay Area hard-art genius MX-80 sans singer Rich Stim), facilitates a tightly guided, dark venture into the heavy, multi-rhythm electronic tendencies within a six-string framework that references the sustained tones of Morton Feldman to Ennio Morricone to Pete Cosey. This is not a tribute per se to the films represented as song titles ("Mean Streets," "The Searchers," "Out of the Past") though each musical venture takes a nod to the cinematic view before remorphing and adding layers of abstraction. The pieces follow everything from minimal melodic patterns to fractured beats to concrete outtakes that seem ripped from Miles Davis's On the Corner.

"Naming each track after a classic American film (though none recreates an actual score), O-Type craft stunning, cinematic instrumentals that progress in gradual escalations and hypnotic waves." -- Marc Masters, The Wire