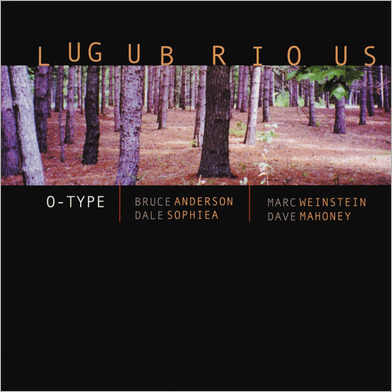 The Berkeley, California collective O-Type -- guitarist Bruce Anderson, sampler/sound sculptor Dale Sophiea, and drummers Mark Weinstein and Dave Mahoney -- returns with Lugubrious. Continuing their explorations and deconstruction into sound O-Type returns with its most focused and startling document, the fourth volume, in The New Edge series. Logging into the finer details of glitch expansion, from behind the mixing desk Sophiea draws out the micro-rhythms allowing them to fester and consume the rich tapestries of Anderson's crowing guitar all the while building backdrops of phase-shifting drones, tape works, and chunks of music concrete.

"Ranging from ambient hum/roar like being inside of a dam or in an ancient submarine; to Japanese drone and gong suspense frozen in the afterlife ... Dark ominous ambient soundscapes drift or sputter into colorful phosphorescent movement. Some pieces feel like distant deep space; others heat up and pulse like lava flowing on its thick fluid path." -- Dream Magazine

" ... a set of instrumentals pitched somewhere between AMM, Can and the electronic sound of Cologne. Here Sophiea switches to sampler to create glitchy cut ups, while Anderson wrestles crackling electricity from his pick-up switch." -- David Keenan, The Wire