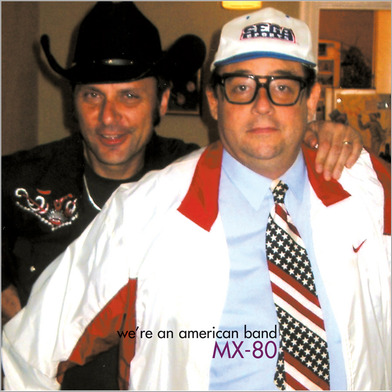 MX-80's first studio album in over a decade -- is both hilariously depressing and morosely upbeat. The ground-breaking Bay Area quartet, known for its searing guitar work -- founder Bruce Anderson was labeled as one of America's "Unknown Greats" by Guitar Player Magazine - and deadpan commentary of vocalist Rich Stim, has managed to combine the worst of the digital and analog worlds to create a masterwork that mixes Satan, Howard Hughes and current theories on brain transplants. In a bit of musical cannibalism, "We're an American Band," includes samples from the cinematic tapestries of O-Type, the musical side excursion guided by MX founders Dale Sophiea and Anderson. Claimed as an inspiration by many underground stars, MX-80's 30 year career is crowned by this tract on the modern American, living up to its moniker as the "the most arty Heavy Metal band in the world."

"... recent offering from these longtime faverave art rock heavy metallers. Boffo cover of the Grand Funk hit mixed along with more of that dada juju sound propelled by Bruce Anderson's stinging gtr lines and Dale Sophiea's sampler, with the great deadpan droll of Rich Stim covering it like no one since...Frank Zappa??? I mean, Buster Keaton couldn't've done a better job!" --Chris Stigliano, Blog To Comm