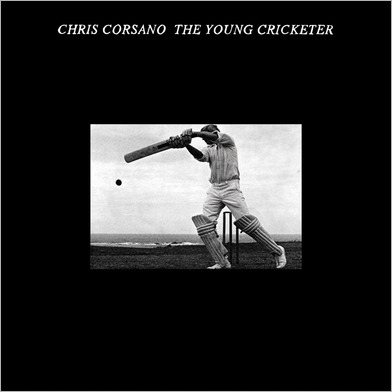 The Young Cricketer is Chris Corsano's debut of Frankenstein/gamelan skin detail. It's a monster and a babe all wrapped under the guise of The Solo Drum Album. Corsano's flea-market kit of cast-iron pot lids, super-bouncy-balls on sticks, butter knives, and even a sax mouth-piece jammed-in-a-hose conjures a part rhythmic maelstrom, like a Milford Graves drip painting, and the sweet metallic ice drones of Tony Conrad and Keiji Haino rubbing sticks together until end days. Globally known for a dozen scorched/power jazz sessions with sax blower Paul Flaherty, ongoing work with Michael Flower, the Vampire Belt duo with Bill Nace and a cadre of collaborators (Jandek, Bjork, Jim O'Rourke, Dream/Aktion Unit, Death Unit, Dredd Foole, etc.), Corsano's drumming has leapt from post-hardcore explorations into outrageous, primeval and outright futuristic during his past 10 years of recorded documentation.

This LP erases any notion of percussion's boundaries. It's a field recording of wire, skin, metal and soul -- not tunes for yr neighbor's bongo party. Originally issued on Corsano's own Hot Cars Warp label as a CDR, this LP was remastered and issued in a 600 edition. Later the record was repressed in 2012 in a 250 edition.

"At one point... Corsano even duos with himself, hurling spittle through a piece of horn while simultaneously pounding out a blurry beat. But that's just the tip of this massive iceberg, which drips with so many ideas and so much head-grabbing sound I almost wonder if Chris should retire now -- this would easily qualify as the life-highlight of most sound-generating mortals." Marc Masters, Noiseweek