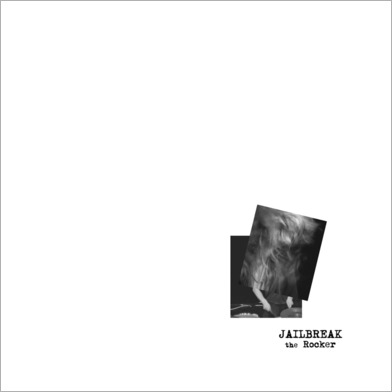 Jailbreak is the duo of pedal steel/vocalist Heather Leigh and drummer Chris Corsano. The name foregrounds the kind of outlaw violence with which the two reformulate rock/roll instants by bringing free jazz fire power to amp-humping sex beats. Their musical alliance goes all the way back to the legendary Brattleboro Free Folk Fest, the birthplace of the 'New Weird America', where Corsano and his long-term saxophone partner Paul Flaherty joined Leigh and Christina Carter for a quartet show that took the roof off the building and the skin off their fingers. Since then Corsano and Leigh have worked together as part of Taurpis Tula and as members of Thurston Moore's Dream/Aktion Unit.

So, who better to describe this 700 edition debut LP, than Mr. Flaherty: For those of you who've been worried that the Free Power Noize scene has become a little too tame, (and seriously who isn't somewhat concerned about that), a new screamin' creamin' duo -- Jailbreak -- expoldes to the rescue. The Rocker is a blast-furnace of blisteringly joyous witch-howling assaults on the essence of whips and chains and repressive injustice gone legal. Both of these magisterial musicians are capable of extreme dynamics and subtleties, but those concepts don't get in the way of this monster-truck of a record. And why should they when drums and guitar can slash and burn in a riotous electric smash fest like this crazed merry madcap of an album. Over the top . . . Way!

"... when Ms. Murray rips open this LP called The Rocker, she might as have been rakin them strings across the inside of my skull. There I was fightin the infernal racket w/everything I could muster, yet diggin it all the time. It was 'Bad Motor Scooter' live all over again. Ronnie was tearin into that intro back on that eventful night in Seven-Four; brain cells was meltin, worlds was collidin, the chickens of future past was comin home to roost." -- Siltblog

"No idea who's singing, but that person is channeling Haino Keiji. Don't let the Thin Lizzy refs fool you -- this was made in Scotland. The choice of guitar here provides for the most brutality, a prolonged assault of scorched-earth distorto blues/noise cage-rattle with no space to breathe." -- Doug Mosurock, Still Single