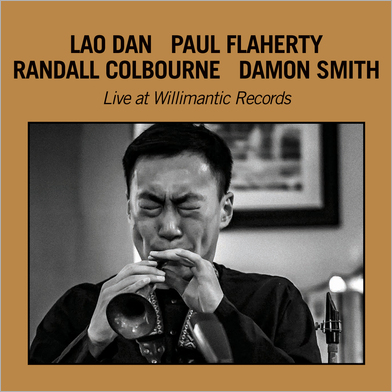 This is the American debut release from Lao Dan, China’s emerging free player on bamboo flute, suona and alto saxophone. Dan’s voice is starkly unique, even among the blurred lines of international Improv/Jazz. He’s steeped in native traditions yet eagerly obliterates those boundaries with ecstatic intensity and haunting melodies. His dense reedy, drones and jagged melodic shrieks are described as a “Whitmanian yawp,” by Marc Medwin in the liner notes.

The album’s opening moments simmer as Dan and Flaherty meditate at the bottom registers before exploding into a multiphonic sustain of runs and melodic jabs. Smith and Colbourne rattle and roar. It’s a splattering overture that eventually resolves as suona and sax merge into a piercing gesture of heartbreaking unity. It turns this record store gig into a point of transcultural definition. Recorded April 2018 at Willimantic Records in Willimantic, Connecticut.