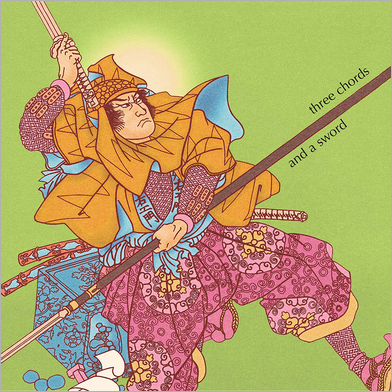 Three Chords and a Sword is a collection of eight cover songs recorded by rock/experimental musician Alan Licht over a span of three decades. Re-imagining both Van Halen’s “Jump” and Sonic Youth’s “Tom Violence” from the perspective of American Primitive guitar soli, employing a chord organ to twist Pere Ubu’s “Heart of Darkness” and Fred Neil’s “Everybody’s Talkin’” into eerie, doom-laden ballads, conjuring the sound of New York’s Suicide with little more than a microphone and patch cord, each song emerges transformed. Even the rarely-heard Bob Dylan spoken word piece “Last Thoughts on Woody Guthrie” is markedly different from the original as heard in Licht’s voice.  Licht’s interpretations echo from a childhood encounter with a Larry Rivers pop art painting drawn from a coloring book of Japanese art, which inspired the album cover.

As Licht explains in the liner notes: “Seeing Rivers copy the copy, which was the outline of the original Japanese painting, and then make his own painting is probably what planted the seed of the approach to covers that I’m taking here; using the bare bones of a song but filling in the details in my own way, and then recording my own version. For this release, I took the image from the original coloring book, and asked Robert Beatty to color it in, instead of Rivers—kind of a cover version of Rivers’ cover version of Kuniyoshi, as invited by the concept of a coloring book to begin with.”

Gatefold, limited CD with remastered audio and updated artwork from the original digital self-release. Album features songs by the above-mentioned artists plus Will Oldham and bonus covers by Stooges and an insert with a text-based version of Alvin Lucier's "I Am Sitting In A Room” generated by artificial intelligence.