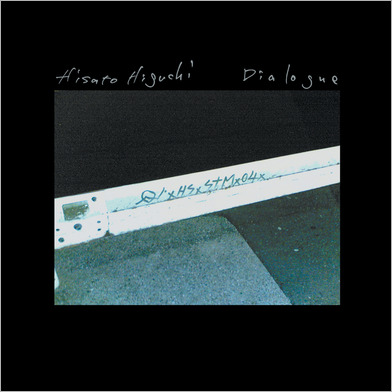 Dialogue is the first American release by Tokyo's new rising power Hisato Higuchi. Originally a puppeteer, Higuchi has transformed his glacial, shadow-box inspired hand movements to the twilight theater of electric guitar. His six-string tones and hushed vocals fan out from these haunted torch songs and burning embers of Patty Waters and Keiji Haino's quieter, introspective work. Overall, a beautiful meditation and entirely new vision of celestial blues. His seemingly wordless Japanese croon is a smoky, after-hours call of loss or spectral introspection.

"These [songs] could be the whispers of lovers, the reassurances of parents to sleeping children, the prayers of the lost and lonely, or the tremulous breaths of the finally redeemed. It is heady and intoxicating stuff." -- Nick Southgate, The Wire

"Blues are here, scales broken down into measured drones and bends and scratches. Tones disintegrate, hiss and hum for a second before disappearing. Notes drop from the sky and land on a grid, Higuchi doing little more than directing, channeling the forces of gravity." -- Alexander Provan, Dusted