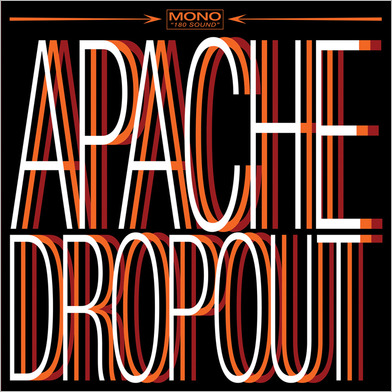 Apache Dropout is a full on lysergic boogie trio from Southern Indiana who've self-released a handful of recordings while touring the sub-U.S. during the past couple years. Finally, their debut LP is here to catch you up with their three-minute-&-less anthems crafted of '60s epoch fuzz. They channel soul melodies, primitive rock thump and blasted solos that are soaked in the dimethyl-trip of teenage visions (see songs "Sam Phillips Rising" and "God Bless You Johan Kugelberg" for that) and a few whifs of Tuli Kupferberg.

Sonny Blood is the enigmatic howler/vocalist/guitarist whose swagger and melted riffs leads the way. Formed in 2008, the group's previous endeavors include John Wilkes Booze, Hot Fighter #1 and Lord Fyre.  With just guitar/bass/drums they've pushed these 11 songs into highly textured nuggets of punk art that follow in the wave of The 13th Floor Elevators, The Velvets, and Patti Smith Group. We've got no doubt, this is going to floor all ears in 2011 and 2012.

"This LP is as great a re-scoring of the garage-rock aesthetic as you're going to stumble across in the 21st century." -- Mojo

"A myriad of garage/psych/proto-punk that leaves you wanting more." -- Uncut

"A monster of drug-fueled 60s psych and hambone R&B, a living tribute to the thousands of teenage ghosts and dead dreams which were born and quickly faded in the split level garages of suburban homes in the Vietnam era. Whatever these guys were working up to in previous endeavors, they let loose of it here - really hard - and come up from the dirt with the best example I've heard in years of this sort of red-eyed, blaring rocknroll: better than the Reigning Sound or other Cartwright projects excepting Oblivians, better than Thee Oh Sees, better than Pierced Arrows, as good as the Cheater Slicks. Years and years of alien subcutaneous seedlings come busting out of every crevice here, like the Stephen King segment in Creepshow, and cover this truthful, soul-bound material with obscene, green fuzz, connecting Dead Moon to Roky to the NY Dolls to 'Cream Puff War.'" -- Doug Mosurock, Still Single