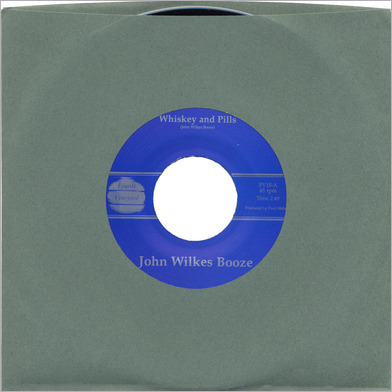 John Wilkes Booze came from the very Indiana soil that birthed, in the mid-1970s, The Gizmos, MX-80 Sound and others. Through savage showmanship and a damaged, conceptual, artful view of rock 'n' roll these six created a sound not far from the orbits of subterranean garages or El Saturn. Recorded 100 percent live, direct to 2-inch tape by Paul Mahern, singer of the legendary Zero Boys. Edition of 600; hand-numbered. This was the debut vinyl release from JWB before releasing two LPs on Kill Rock Stars, LP on St. Ives and a few cassettes before imploding into various strains, including Apache Dropout and NormanOak.

"In the same rauccous, fucked-up-and-bored vein as '70s Hoosier punks such as the Gizmos and Panics, the A-side (whose titles says it all) is a nonstop gallop of low-rent R&B organ, fuzz guitar and hopped up fratboy vocals. On the flip, the slide-guitar blues of 'Marc Bolan Makes Me Want to Fuck' (me, too) disturbingly invokes the phrase 'children of the revolution' with such lip-smacking glee you can't help but ponder how many pederarasts are to be found in the JWB lineup." -- Fred Mills, Magnet