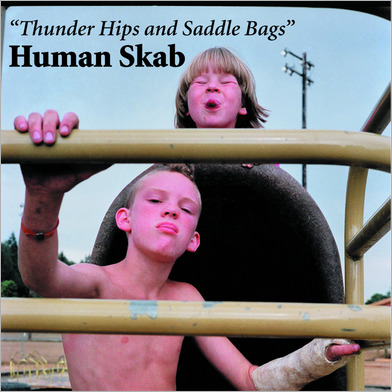 Human Skab was a 10-year old boy from Elma, Washington who played African music with buckets and spoons. Thunder Hips and Saddle Bags is a 1986 cassette recorded by young Travis Roberts with his neighborhood pals and siblings. It was injected into the underground network of tape traders, zine scribes, college DJs, and freak seekers who were universally bowled over by its bewildering and utterly poignant snapshot of the mid-1980s. Skab's music -- an orchestration of pots n' pans, three string guitar, poorly-tuned upright piano, broken bottles, toy guns, a garden rake, and a "Snake Mountain" microphone -- is a response to fear of nuclear war with the Soviet Union, He-Man cartoons, Twisted Sister, the coolness of dinosaurs, the uncoolness of John Wayne, and Ronald Reagan. Roberts captures the fervor of do-it yourself ethos, punk energy and the rawness of early American folk by acting on his wild child imagination and enigmatic sense of song.

These rare recordings have never been made widely available until now. This reissue includes the complete 1986 cassette. The CD and MP3 version contain a bonus 1987 radio interview. The 16-page booklet in the 500 edition LP and CD contains liner notes by Roberts and Cousin Franky along with many full-color photographs and news clippings.

As Bruce Pavitt wrote in the 1986 Sub Pop zine: the Skab zips around the living room shooting toy guns. He hits the family piano with his fists. He tries real hard to play guitar. He makes up songs about terrorism and radiation and throwing rocks at windows. Cool!

This reissue "restores a really obscure real people/disobedient kid/nascent punk rocker cassette that was issued as part of a prodigious run of weirdo documents recorded by an out-of-control 10 year old in Elma, Washington in the mid to late 80s. This is the first full release of his best known cassette, Thunder Hips And Saddle Bags, the release that put him on the weirdo radar after it made it through to tastemakers like Bruce Pavitt of Sub Pop. The Skab recordings are much more interesting than just some maniac kid goofing off. His lyrics are funny, sharp and often inspired and there's a precocious confidence and energy to the tracks, with inventive non-musical settings and primitive interventions on various instruments and household appliances." -- David Kennan, Volcanic Tongue