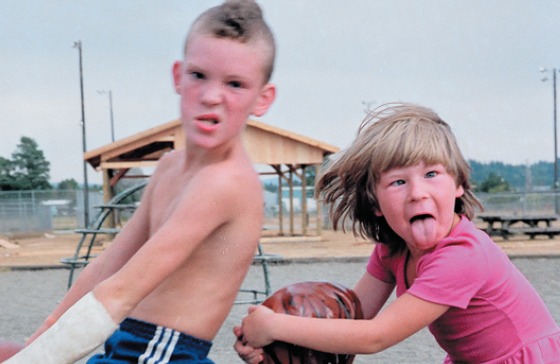 "Well, there's this 10-year old singer from Elma, Washington. He's really cool. His mom calls him Travis but his real name is Human Skab. Picture this: the Skab zips around the living room shooting toy guns. He hits the family piano with his fists. He tries real hard to play guitar. He makes up songs about terrorism and radiation and throwing rocks at windows. Cool!" -- Bruce Pavitt, Sub Pop Zine 1986

"If Captain Beefheart were ten years old, this is what he'd probably sound like" -- Spin March 1986

"Human Skab is a ten-year old boy who plays African music with buckets and spoons. He story sings about his life and the things he sees. His musical influences are big time wrestling, He-man cartoons, and Moltey Crue." -- KAOS Radio magazine, Olympia, WA, 1986

"I'm not doin' this for the money. I'm on a mission. I have a message for the world. It's not just playin' guitars good that is important. It's all the things that you do." -- Human Skab, interview 1986