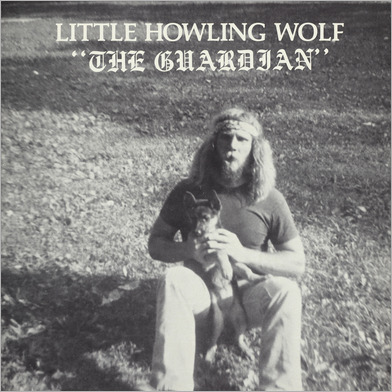 Reissue of the 1982 LP by Chicago street musician, bluesman, actor, storyteller and truth seeker known as Little Howlin' Wolf. Wolf is also a true outsider, whose wrenching soulfulness and fire-brained intensity have been captured in a breadcrumb trail of confounding and intentionally obscure self-released records.

In the late 1960s Wolf -- born James Pobiega in 1950 -- was already a saxophone wailing fixture at the legendary Chicago hangout, Maxwell Street Market. By the mid-1980s he released nearly three dozen 45s. Those singles are sprawling journeys into Wolf’s world vision, as told through his gravelly voice and an array of instruments in styles and influences not limited to: American Indian, Polish and gypsy folk musics, Voodoo, vocal chants, blues, calypso and avant jazz. Often, it’s all filtered through overdubbed abstraction.

Wolf issued two LPs collecting some of those singles -- The Guardian (1982) and Cool Truth (1985) -- both now reissued by Family Vineyard.

The Guardian is a baffling, hyper-creative statement recorded between 1976 and 1982. It’s also vastly sincere and some of Wolf’s most accessible and deeply emotional songs, yet it orbits a universe known only by the likes of Captain Beefheart or Albert Ayler.