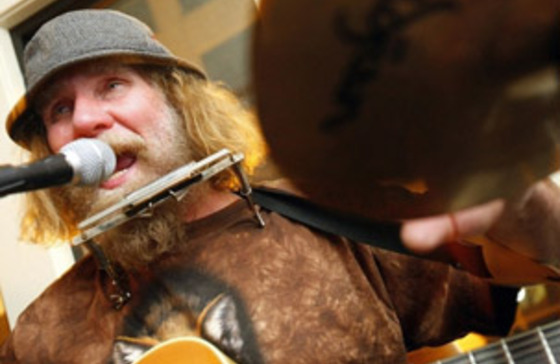 James Pobiega, a 6'9" Polish-derived man from Chicago's South Side, performed heavily in bars and and to a greater extent on the street of his home turf during the late 70s through the mid 80s under the name Little Howlin Wolf. During that time, self-released 32 45s (that we know of) and two LPs (compiled from the 7"s) titled The Guardian and The Cool Truth. The LPs show a unique and visionary take on emotive, raw, dissolved blues featuring Wolf on every instrument he could lay his hands on with a wrenching souldfulness and commanding fire-brained intensity to match Albert Ayler. The 45s, though, are where Wolf really stretched out, taking his music to its furthest reaches including stabs at Calypso, gypsy songs, Country-Western and children's songs.

"Wolf is so complex and separating the facts from his brain is real difficult ... 6'9" Polish south side Chicago badassnessed...invented breakdancing...wrote original 'Bad to the Bone'...inspired the 'Deacon Blue' song...drunk and drug addict street musician from 80-90's...now clean, runs and eats healthy...released 30+ (?) 45's that he sold on the street each with his unique stab at genre; calypso, reggae, blues, vocal chants, which he changed his name and invented the label name on so he wouldn't be easily traceable...Two self-released LP's The Guardian and The Cool Truth, he is the master of mind-blowing lo-fi off-kilter weird jam rooted in down-to-earth soul." -- Ian Nagoski

There are no upcoming tour-dates for Little Howlin' Wolf.