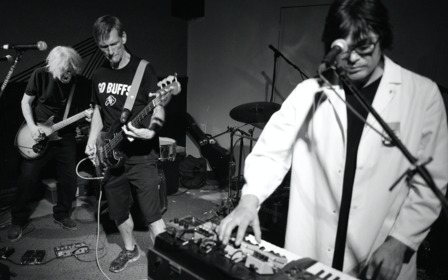 Dow Jones and The Industrials Return

It happened. Dow Jones and the Industrials reformed for three shows in Indiana this past weekend to celebrate the release of the long-awaited Can't Stand The Midwest 1979-1981 anthology.

In short -- they killed it.

Original members Greg Horn and Chris Clark were joined by Vess Ruhtenberg on keyboards/synths and drummer Mike Doskocil. Mr. Science made apperances by a video link to sing his twisted anthem "Latent Psychosis" during two of the performances.

Thanks to fans throughout Indiana, the Midwest, Canada, New York and beyond who made the trek. Dow Jones shared the stage with both versions of the Gizmos -- the original 1976 version and the 1979 version -- in Bloomington on Sept. 17 for an epic show.

Photo by Carl Abernathy from The Spot Tavern in Lafayette on Sept. 15. More photos on the blog, Cahls Juke Joint.