Manage this artist
Dow Jones and the Industrials 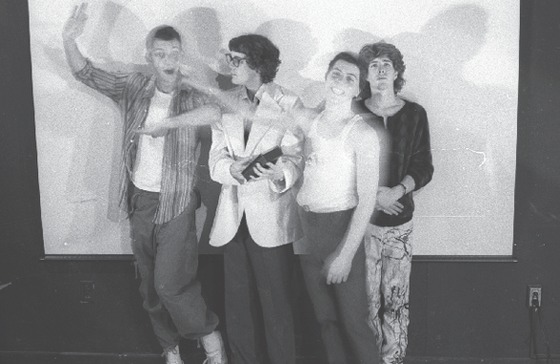 Dow Jones and the Industrials were a punk/new wave band from West Lafeyette, Indiana that existed for an explosive two years -- 1979 to 1981. Yet during this brief time, they released the classic split LP with Gizmos, Hoosier Hysteria, and a self-titled 7" EP. The song "Ladies With Appliances," was also featured on the Red Snerts compilation. Originally, the band consisted of Greg Horn (guitar, vocals), Chris Clark ( bass, vocals), drummer Tim North, and Brad Garton (otherwise known as "Mr. Science") on keyboards.

"For two years, Dow Jones and the Industrials were an absolute phenomenon in West Lafayette. To the rest of us, stuck in Indianapolis and Bloomington, they were a great and timely rock and roll band. They definitely stood apart from their peers. A big part of their persona -- the love/hate relationship they had with technology -- was something you instantly recognized and understood, without ever being able to quite pin down. Like the Gizmos, the Zero Boys, the Panics and a few others, they made a huge noise, a great big Something out of the Nothing that there was to work with in Indiana in the late 1970s" -- Dale Lawrence

There are no upcoming tour-dates for Dow Jones and the Industrials.

Dow Jones and the Industrials News: