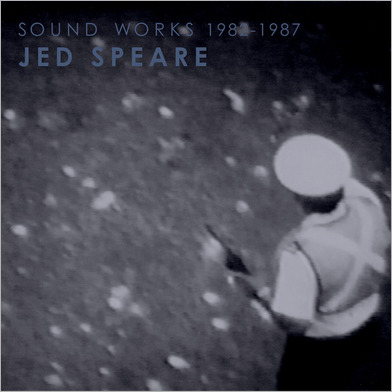 Sound Works is the first collection of Jed Speare's long-form musique concrete compositions. Speare is a crossover artist who has been working in sound, video, and performance for over thirty years. He is the creator of the Folkways LP Cable Car Soundscapes (1982) and throughou the early 80s recorded with San Francisco groups, including Research Library (appearing with and solo on the legendary Red Spot compilation LP on Subterranean Records).

The music on Sound Works reflects Speare's investigation and uniquely expressive practice of analogue sound/field recording, editing, combining and mixing during 1982 to 1987. These five pieces are vibrating, towering movements of complex sound strains that expand and grow with each listen. This archival release includes a 12 page booklet with an introduction by video artist and writer George Quasha, Speare's detailed notes on each piece, rare photographs and score reproductions. The audio was remastered by Bhob Rainey.

"Speare's tape pieces are concrete in the most literal, tactile sense. He privileges dislocation from acoustic origin via analogue means and hand-cranked manipulation. This means his sounds carry the ghost presence of the familiar within their mutant genes. For 1982's At the Falls, an attempt to create 'an ambience like water' without using 'any water sounds,' this means the displaced source material goes through a sequence of abstractions only to be called to attention as an imitation, or approximation, of nature at its least abstract ... Collecting two hours of Speare's '80s sound works in the one place, this compilation acts as a near-perfect primer." -- Jon Dale, Dusted