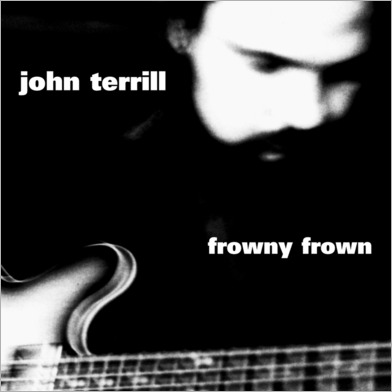 Between 1988 and 1998, John Terrill (co-founder of the late '70s new/no wave Dancing Cigarettes) recorded this album and made a few copies for close friends and for mailing to musical heroes. In another era it could have stood next to Scott Walker or Michael Hurley's early albums or even Randy Burns' LPs on ESP Disk. It's an out-of-time classic that mixes honey baked orchestration, acoustic soul, and pop-psychedelia into cracked and spellbinding songs. Now reissued for all and remastered with a bonus track from 1984. The transparent velum packaging mirrors the handful of homemade copies John originally issued.

"I feel this album is a little gem. Lyrically--a man up against it (Frowny Frown) as opposed to (Smiley Smile), but still leaning towards humor, kindheartedness, and no bitterness within the adversity. A very feeling album and all kinds of sonically interesting things. The kind of direction Brian Wilson might even have taken himself if his own circumstances had been different. Beach Boys meet Mothers of Invention. It has, then, the simplicity, innocence, and at the same time the musical innovation of the Beach Boys, plus the other side of the coin, the innovation of the Mothers of Invention. Sometimes almost like The Shadows or The Tornadoes performing at a 1960 wedding reception, and then sonic blasts and great instrumentation and arrangements peppered throughout. A musician who seems to have absorbed all kinds of previous things, and then created his own very original and absorbing album." -- Bill Fay, March 2008

"Unlike the wiry art-punk of his late-'70s band, Frowny Frown is a far more intimate set of homespun pop-psychedelia, recorded between 1988-99 and only hand-pressed for close friends. A halcyonic journey with rich layers of vocal harmonies that fans from Bobb Trimble to Galaxie 500 will find much to love." -- Other Music