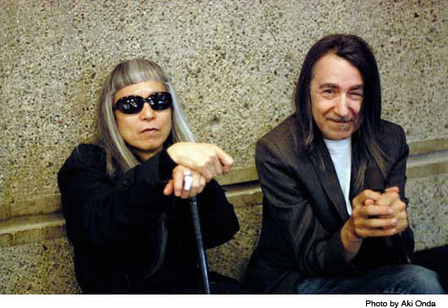 On November 11th Loren Connors and Keiji Haino will perform a live, improvised soundtrack to The Passion of Joan of Arc -- Carl Theodor Dreyer's 1928 masterpiece. The event is at Shibuya in Tokyo, Japan. But Loren won't be traveling to Japan. Instead he will perform in New York City via a slightly delayed Internet hook-up with Keiji in Tokyo.

According to the Google translation of the Japanese concert announcement: "This time, do not dare to be invited Connors be dangerous to the long-distance movement suffers from Parkinson's disease, experimental performance center of local Brooklyn Issue Project Room in, you get to play in the movie is screened. Then send out sound and video using the Internet, avant-garde blues guitarist true of another person, Keiji Haino will Mukaeuchi the sound of Connors and movie in Tokyo.

"It will be a slight delay will occur in the synchronization of the Brooklyn / Tokyo between, but including the delay time difference and two people would be "playing". In order to accurately as possible and synchronization!? Whether there for anything such as the Internet if you did not used to this, you will digital screening rather than a film, but at 20 frames / sec worth is said to screening rate of silent film era in screenings, I pull the video representation of the original. Japanese / English subtitles."