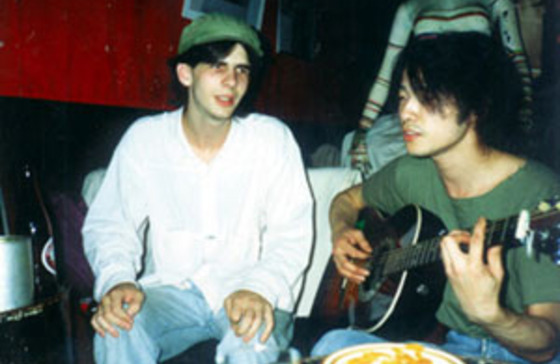 The tall gent Philip Gayle (pictured on the left) has slowly been churning ears with his truly singular take on acoustic improvising for the past ten years. New York City-via-Houston based, he has avoided much notice from wide ranging auidences despite his string of releases and critical praise. Dean Roberts lauded in Opprobrium that Gayle's playing on his '97 debut Keguribap is "wildly individualistic ... this makes a lot of [his] contemporaries/predecessors seem overrated in the eternal search for expansion on the instrument." Gayle seems to talk with trees, moving wind and desert elements with hollowed bodies, wooden fret boards and steel strings. Assorted percussion, gongs and toys also fliter in. Gayle has three releases on his own Yab Yum imprint and one on Fleece.

There are no upcoming tour-dates for Philip Gayle.